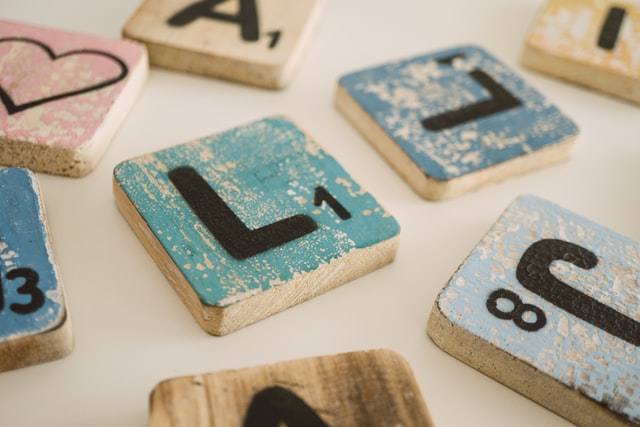 Word games are always a popular choice among people of every age. The best part is that there are several types of word games to choose from, so everyone can find their cup of tea. Some people enjoy 1-player games to challenge their skills, others like to use them as a learning strategy, and then there are multiplayer games that are always synonymous with fun and friendly competition.

These types of word games are frequently grouped under the names Scrabble or Scrabble-like since this is the most famous and popular game within this category.

Their rules and gameplay may be different, but in general, they are board games in which the board is divided into regular squares and special ones (that provide extra points). Each player receives a set of letters and the goal is to build words with them and lay them down in such a way that they overlap on the board, crossword-style.

The letters are worth different points depending on their frequency in the language in question. To collect their points, the players must play words containing them. The player with the highest score wins.

Crossword puzzles are a classic that hardly needs an introduction. The name itself immediately sprouts the image of a grid of black and white squares overlapping each other in some sections. Yet, there are games with other configurations too. In some versions, the players are the ones that need to add the black squares as they go. In others, there is no grid at all, and the rows and columns of squares make up different shapes.

Regardless of the configuration of the game, the rules are always the same. The players need to fill in the squares with words based on a clue. This is usually a definition or an example of the use of the word.

Crosswords should not be confused with Fill-In Crosswords. Although they share part of the name and the same grid configuration, the latter does not involve any clues nor does it require any type of language knowledge. Instead, it focuses on logic with the players having to find a way to fill the crosswords' grid with a set list of words.

Just as with Crosswords, Word Search is also a classic well-known to all. It is a puzzle-like game in which the players receive a list of words that they must find within a grid of letters. The puzzles are usually divided into themes or, at least, the words on the list share something in common.

These types of word puzzle games are also easily adapted to players of different ages. The puzzles for kids, for example, tend to be smaller and the words are hidden only vertically or horizontally in the grid.

The ones for adults are larger and have the added difficulty that the words can also be written backward or diagonally.

Wordle is the most recent digital word game set to take over the world of word puzzle game lovers. It is a simple daily puzzle with even simpler rules. After being bought by the New York Times, new independent versions started to pop up on the internet, giving players the same challenging features they love in Wordle, but without the restriction of one puzzle per day. To avoid copyright infringement, these versions were named Word Hurdle.

The goal is to discover the 5-letter word of the day through trial and error. The game opens with a 5x6 grid. The players must first insert any random 5-letter word. If the word inserted contains any letters that are also present in the daily term, these will be highlighted in yellow or in green if the position of the letter is the correct one.

The players can keep trying out different combinations to discover as many highlighted letters as possible, but they must be careful! They can only enter up to 6 words, and one of them must be the winning one or they will lose the game!

This is a wide category of types of word games. Scrabble and Words with Friends can also fit in it, for example. However, contrary to these, games of anagrams are usually for a single player.

The rules are simple. The player receives a set of letters that are an anagram of several words. The goal is to unscramble the letters to find them.

There are two types of anagram games that are particularly popular. The first has a configuration similar to crossword puzzles and the number of blank squares works as a clue to the length of the words the player must find. The second type is much simpler - instead of the crossword configuration, the player has a list with the number of words they must create and their only clue is the length of said words.

The latter type is also the inspiration for other word games such as Spelling Bee, made popular as part of the New York Times catalog of puzzle games. In the case of this game, instead of receiving a list with the number of words they must create, they see the total number of points that can be achieved by unscrambling the letters on a hive. It is up to them to find those words and figure out their length.

These are multiplayer games in which a group of players must work together and compete against other groups. The focus is not on words, but rather on semantics.

A popular game under this category is Mad Libs. In it, the players get a page with a short story in which some keywords are replaced with blanks containing only an indication or clue like “verb - past tense”, “type of food”, “noun”, “name of singer”, and so on. Each group of players must then ask the others to complete the blanks without giving them any context besides the clue. The result is often nonsensical, comic, or surreal stories.

Codenames is also a popular game under this category. Its goal is to find out all the codenames of the other team, based on a hint word given by another player.

Cryptogram puzzles are word games in which the players need to decode a short piece of encrypted text to reveal a message. They are often referred to as ciphers, but this name implies that both numbers and letters can be employed, while cryptograms only use letters and words.

The puzzles are normally converted into story games in which the players need to uncover a secret, a murder, a treasure, or something similar by solving a series of cryptograms,

Although it is often forgotten when it comes to types of word games, the reality is that Pictionary also belongs on this list. Think about it. Its name is a combination of ‘Picture’ plus ‘Dictionary’.

It is a team game in which the two teams must compete against each other to move through the board and be the first to reach the last square. Depending on the color of the square they fall in, one player on the team has to draw something representing a word or a phrase for the other members to guess.

These are only a few examples of broad types of word games. Each type could be broken down even further they contain many games with very specific rules and gameplays within them. Just use them as a guide or a starting point to dive deeper into the world of word puzzle games and have fun playing around with your language knowledge.

noun: the act of digging.